The foundation will be supporting a number of innovative initiatives within the D39 schools with five new grants that were recently awarded. The grant for Central School’s 21st Century Learning Space will pilot the initial phase of creating a collaborative learning area by reconfiguring the computer lab, library and adjoining classrooms. This new student-centered space will include technologies and other tools, space configurations and furnishings to facilitate various learning modes, and more.

Pre-loaded, portable audio books called Playaways, will be purchased for Harper’s library thanks to a Foundation grant.  Playaways increase opportunities for students of all reading abilities to have creative, educational, and successful literature experiences both in school and at home, provide support for struggling readers, and give all students access to more challenging text.

HMS will host composer Quincy C. Hilliard as artisan-in-residence for the sixth grade Hawks Band on February 19, 2014. The band will be performing several of his compositions in an upcoming concert and what better way to elevate their performance and understanding of the music than to have the actual composer teach it! Dr. Hilliard will rehearse with the band, provide students with his insight as a world-renown composer/conductor and hold small group master clinics throughout his day at Highcrest.

A similar grant was awarded for both HMS and WJHS to host artisan-in-residence Andra Durham, a classically trained violist who now fiddles and performs in Nashville. Ms. Durham, who grew up in Wilmette, will conduct an all-day master class for the 5th-8th grade orchestra students on February 26, 2014 and teach fiddling techniques and bluegrass music.  Later that evening during the orchestra’s Stringapolooza concert, the students will play a fiddle piece with Ms. Durham that they learned and rehearsed earlier in the day.

Colleen Chick, a first grade teacher at McKenzie will purchase a GoPro camera with funds from the Foundation’s fifth grant this cycle.  This camera will be used as an integrated and student-directed technology tool to increase independence and intrinsic motivation in the classroom. The students and teacher will employ the GoPro camera as a resource to support writing, develop presentation and expressive language skills, document scientific processes, and inspire creativity across the curriculum.

View Our Wall of Honor!
Looking to honor a special teacher, student, friend, or neighbor in District 39 this year? Let us create and deliver a beautiful, personalized Certificate of Appreciation. Just click here!

Take a Look at Gripp Grants in Action! 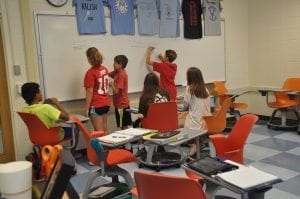